We believe that transportation is the precursor to building new communities not the other way around. The large mistake that was common practice of past governments was to select a piece of land in the desert and build a number of buildings, which lacked the necessities of a normal community that did not provide adequate, consistent and scheduled transportation. We believe that building a transportation route that is aimed to reach a big city will create small communities (satellite towns) to be erected along its routes. We envision that many communities will be erected thru this national project on mainland as well as in Sinai. Sinai is mainly mountains but on its coasts there are flat lands that can be used to build these new communities, not just for tourism but also for other industries. Many may make a rapid opinion that this project will compete and take business away from EgyptAir or any other private transportation. Our answer based on research is this is a multi faceted project, it complements the new housing delta project (Cairo to Ismailia and Cairo to Suez), agriculture expansion to save the Nile delta, promotes domestic and international tourism, establish new industrial villages and interconnects with Saudi Arabia for deeper bilateral economic relations. We recommend that EgyptAir would be an investor in this project and to  provide hosting and dining services. We see EgyptAir complementing this project. We conclude that it is a vital project that must be implemented to take Egypt to another level.

Numerous benefits with train systems:
Faster, more efficient mobility, enormous energy savings, reduced environmental damage - a train system solves many problems:
1) Creates tens of thousands of green jobs nationwide building the new rail infrastructure and manufacturing the rail cars
2) Pays for itself by significantly reducing oil subsidies
3) Offers a convenient, comfortable way to travel without hassles or delays
4) A major step toward solving global warming by reducing our oil consumption and emissions
5) Freedom from oil - Powered by clean electricity from renewable energy sources: wind, solar, geothermal, ocean/tidal
6) Safe, affordable, green transportation for everyone
7) Saves lives (6000 Egyptians die each year in car accidents)
8) Provides efficient mobility that moves people and goods without delay and waste
9) Helps the horizontal migration of Egyptians outwards away from the delta
10) Increases the flow of tourists to and from destinations.

Jobs Created:
We envision that thousands of jobs during and post construction will be created.

Materials used for the Railway:
All materials used are available in egypt except the Locomotive and passenger cars. for the tracks, cement base, metal rails, sleepters and other metal objects. We suggest in the first stage to purchase the locomotive and passenger cars and the next phase build them in Egypt under the Arab Organization for Industrialization, SEMAF factory (http://aoi.com.eg/aoieng/factories/semaf.html) which currently builds passenger trains and metro passenger cars. They would build these under license to ensure quality and engineering support. The Railway traction equipment and other components would also be manufactured in Egypt when the engineering drawings are supplied by the implementing company that will oversee the whole project.

Its function is to supply power to the running electric locomotive incessantly. Different from the ordinary power transmission line, it must be fixed on the right top of the rail, and then locomotive can get power incessantly through the slip friction between top pantograph and contact wire
The following is proposed:

The Cairo - Suez line will be the first priority because:
1) It will support the new housing delta project from Cairo to the Suez.
2) will lead into the western side of Sinai where El-Tor is located and other new towns,  which will promote development in Sinai.
3) Will lead to Sharm El Sheikh which will enhance tourism in Sharm El Sheikh by increasing the volumes becuase transportation will be less expensive and more convenient and passengers can hop on to go to Sharm Elsheikh from mulitple locations.
4) will lead into Saudi Arabia to Medina which will promote tourism from the gulf and enhance and increase travellers for religious trips, therefore increasing revenues.
5) A trip from Cairo to Sharm El Sheikh would be approximately 92 minutes (1.5 hours) based on a speed of 300km/hr)

Proposed Routes to boaster investments and to decongest population and to create new satellite towns or the development of existing towns.

Benefits coming from the Egypt-Saudi Causeway that the Railway will utilize:
The Chairman of Foreign Trade at the Egyptian Ministry of Commerce, Hussain Omran, said such a causeway would increase trade between the two countries by more than 300% from the present $4.2bn a year to more than $13bn in two years.

Hisham Zazoua, senior assistant to the Egyptian Minister of Tourism, expected the causeway to increase the number of Saudi tourists visiting Egypt every year to more than 1.2 million from the current 300,000.

Therefore, the above numbers will further increase because of the this railway project.

Cairo to Ain Sokhna is not depicted here but can be analyzed in depth with all that is proposed.

West bound
1. 6th of October to North Coast (Alexandria)
2. North Coast cities and on to Libya

According to Eng. Mohamed Said Ali Dawoud - Projects , Research & Design Sector Director at Semaf Railway Factory – Arab Organization for Industrialization: The project for the establishment of the high speed train inside Egypt and the Middle East is a good project for civilized future transfers in the region to a new era that leads to keeping up with the development of the world for being dependent on railways for creating new societies with a better future. As for the estimated prices, it depends on specific characteristics, and estimate for per air-condition electrical train which consists of 10 cars with the required speed will costs nearly $20,000,000 (twenty million dollars).  As for establishing the rail it will cost in the range of $2,000,000 (two million dollars) for per kilometer (each way) according to type of soil this plus costs of establishing the electrical network and the stations.   These prices are Discretionary at least within the next five years.

Eng. Mohamed Said Ali Dawoud is a Contributor to projects for Egypt.

Note: The cost of an airplane that carries 70 passengers is approx. $100 Million, in comparison to a train that carries 1000 passengers would cost $40Million. The train would make more frequent trips and will be more profitable. -Samy Ashour.

The above numbers/estimation is rough and are based on experts in the field but should not be taken literally.

Close up of the proposed train paths Cairo / 6th of October onward to the East to Suez and Ismailia. THE NEW DELTA

The Egyptian Rail system will integrate with the Haramain High speed rail which is being constructed (Red Line). We are proposing extending that rail upto to Tabouk and to the Saudi Egyptian Causeway. 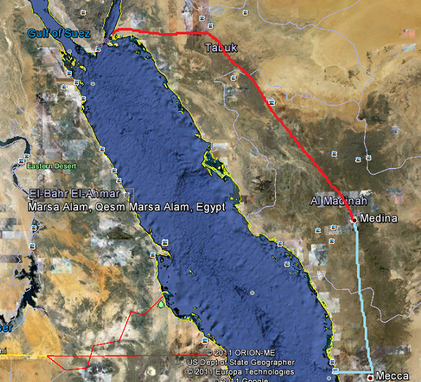 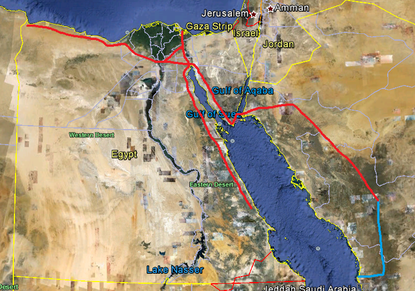 The new Egypt Railway System will be an integral part of the arab railway system - Not discussed here.

Extending from Libya to the heart of Egypt onto Sinai (Asia) and onwards to Al-Madina Alminawara and finally to the Gulf nations. A railway system that will bring many glad tidings to Egypt. Will boost investments, tourism and unity.

More economical than an airplan. A typical train can load 1000 passengers. The locomotive and 20 passenger cars.

A Train station in China - Interior 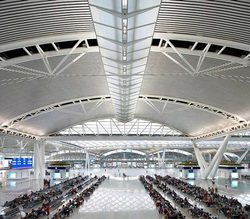 The Bullet Train in China 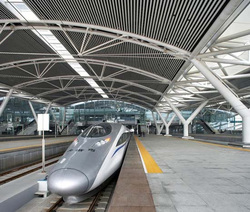 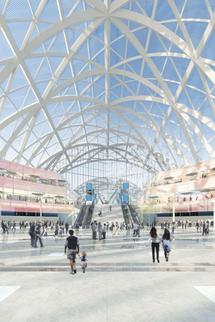