We believe that transportation is the precursor to building new communities not the other way around. The large mistake that was common practice of past governments was to select a piece of land in the desert and build a number of buildings, which lacked the necessities of a normal community that did not provide adequate, consistent and scheduled transportation. We believe that building a transportation route that is aimed to reach a big city will create small communities (satellite towns) to be erected along its routes. We envision that many communities will be erected thru this national project on mainland as well as in Sinai. Sinai is mainly mountains but on its coasts there are flat lands that can be used to build these new communities, not just for tourism but also for other industries. Based on research is this is a multi faceted project, it complements the new housing delta project (Cairo to Ismailia and Cairo to Suez), agriculture expansion to save the Nile delta, promotes domestic and international tourism, establish new industrial villages and interconnects with Saudi Arabia for deeper bilateral economic relations.

Numerous benefits with train systems:
Faster, more efficient mobility, enormous energy savings, reduced environmental damage - a train system solves many problems:
1) Creates tens of thousands of green jobs nationwide building the new rail infrastructure and manufacturing the rail cars
2) Pays for itself by significantly reducing oil subsidies
3) Offers a convenient, comfortable way to travel without hassles or delays
4) A major step toward solving global warming by reducing our oil consumption and emissions
5) Freedom from oil - Powered by clean electricity from renewable energy sources: wind, solar, geothermal, ocean/tidal
6) Safe, affordable, green transportation for everyone
7) Saves lives (6000 Egyptians die each year in car accidents)
8) Provides efficient mobility that moves people and goods without delay and waste
9) Helps the horizontal migration of Egyptians outwards away from the delta
10) Increases the flow of tourists to and from destinations.
11) More economical than an airplan. A locomotive and 20 passenger cars will carry 1000 passengers, while a typical airplane traveling to saudi Arabia would cary less than 100 passengers. An airplane with that capacity costs about 100million dollars, therefore we will need ten airplanes to carry the same as one train.

Jobs Created:
We envision that thousands of jobs during and post construction will be created.
The following double track railway line is proposed:

Suez – Sharm El Sheikh (approx 335 Km)
Stations:
1. Suez
2. Sharm Elsheikh
3. Sharm El-Sheikh Airport - Integrated with the airport outbound/inbound halls (for immigration and customs purposes) onwards to the Egypt–Saudi Causeway Park to Tabuk and then to Medina. The estimated travel time from Cairo to Madina would be 3-4 hours. This project will also be integrated with the Saudi rail project that is proposed from Tabuk to Madina)

Benefits coming from the Egypt-Saudi Causeway that the Railway will utilize:
1. The Chairman of Foreign Trade at the Egyptian Ministry of Commerce, Hussain Omran, said such a causeway would increase trade between the two
countries by more than 300% from the present $4.2bn a year to more than $13bn in two years.
2. Hisham Zazoua, the Egyptian Minister of Tourism, expected the causeway to increase the number of Saudi tourists visiting Egypt every year to more than
1.2 million from the current 300,000.
3. Therefore, the above numbers will further increase because of the this railway project.

Keep in mind that the Egypt lines followes must follow the same standards as the Saudi line since we will merge with their existing rail network.
The Saudi railway is being built on double electrified track with a UIC-guage (1435mm), trainload of 300 more tonnes. on ballast with ballastless
sections where the system Rheda 2000 will be installed. The Saudi line is being implemented by the Spanish–Saudi consortium Alshoula group
companies. Spain is a member of the International Union of Railways (UIC). 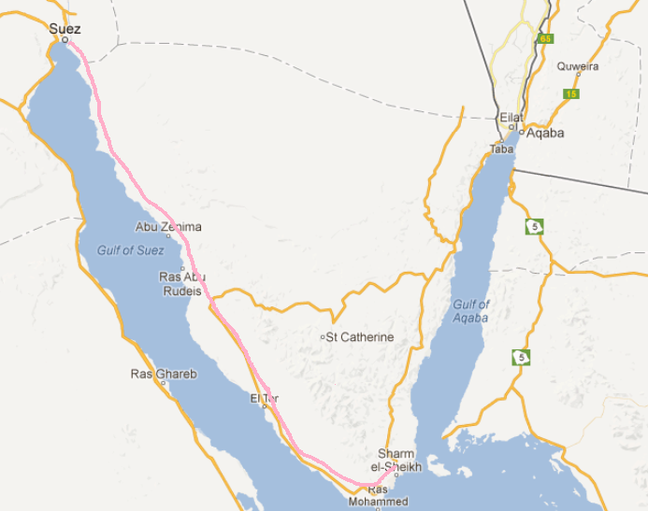 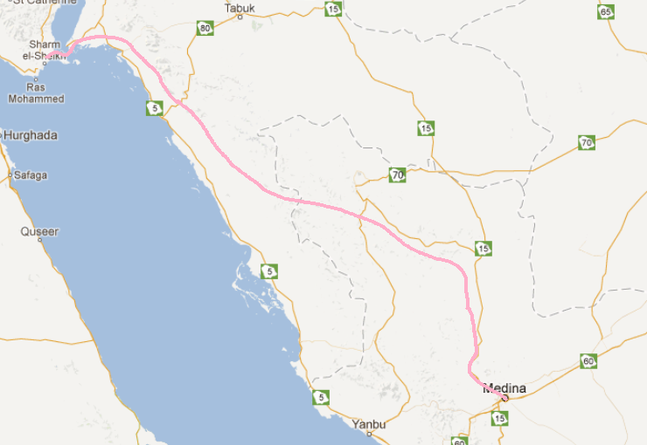 The Egyptian Rail system will integrate with the Haramain High speed rail which is being constructed and is scheduled to complete in 2013. We are proposing that the Haramain line travels further north (shown in red below) to Tabuk so that it meets the Egyptian line. 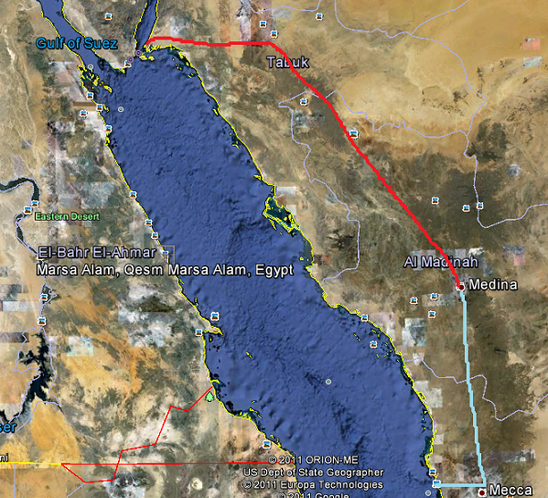 Videos for Medina to Mekkah High Speed Railway:
1) http://www.youtube.com/watch?v=ShTYBcvHHK0
2) http://www.youtube.com/watch?v=9TGz_wnW0Xc&feature=endscreen&NR=1
Ballastless track:
Rail traffic is reaching out toward new horizons on ballastless track systems. The arguments are indeed convincing: long life cycles, top speed, ride comfort, and great load-carrying capability. You take no chances with these systems, especially with newly constructed lines: even at speeds over 300 km/h, your coffee will stay in your cup. Practically maintenance free, ballastless track systems ensure almost 100% availability over many years. In many cases, a  maintenance-free track system is indeed the more cost-effective solution over the long run.
The actual breakthrough in Germany for ballastless track technology on high-speed routes took place on the new line between Cologne and the Frankfurt/Rhine-Main complex. For the first time, Deutsche Bahn AG applied this new technology on a full section of track: with extremely high levels of technical quality, and with great overall success. The success of ballastless-track technology is primarily based on the following advantages:

1- Stability, precision, and ride comfort
Ballastless track assures a permanently stable track position and stands up to the great loads subjected by high-speed train traffic, with performance
characterized by top quality, functionality, and safety. Millimetre-exact adjustment of the track system during assembly on the construction site is the
prerequisite for great ride comfort in the train, and for reduction of loads experienced by the rolling stock.

2- Long life cycles and practically no maintenance
With its service life of at least 60 years - with little or no requirement for service or maintenance - ballastless track offers great availability and unmatched cost effectiveness in high-speed operations.

3- Flexibility and end-to-end effectiveness in application
With its comparatively very low structural height, and with the possibility of achieving optimal required track position, ballast track technology offers highly attractive and beneficial solutions as end-to-end systems technology for main-track and turnout sections, for application on a uniform basis on embankments, bridges, and tunnels.

4- Basis for optimal routing of rail lines
For high-speed operations, ballastless technology enables more direct routing of train lines, with tighter radii and greater slopes. These benefits enable reduction, or even elimination, of costs and work for civil-engineering structures. Highly developed installation technology, sophisticated just-in-time logistics in deliveries to the construction site, and highly efficient project management: these are the prerequisites for fast construction of new rail lines– with integrated quality assurance. Consequently, these are the benefits that have led to application of ballastless track technology in continuing major projects for rail lines: not only in Germany, where approximately 800 km of ballastless track has been installed alone since 1991, but in other major projects around the world. The RHEDA 2000® ballastless track system is the direct way to railways of the future. For heavy loads. At top speeds. With a maximum of
safety.